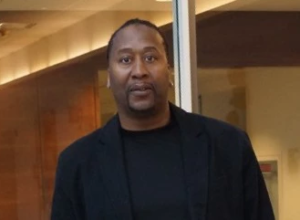 Sean “Dino” Johnson is a dynamic and powerful public speaker, trainer, and actor.  He has been working in the rehabilitation of gang members since 1996.

Through theater Sean has helped in rehabilitation at Sing-Sing prison.  As a former inmate, he transformed himself through theater. This became a life changing experience he wanted to share with others. He is featured in RTA’s video “Unlocked: The Power of Arts in Prison.” Since then, Dino has gone on to become the Marketing Director at Council for Unity. Currently, he works daily in high schools and prisons in New York State.

You may be interested to hear that Dino acted on-stage with acclaimed actor, and Tony Award winner, Charles Dutton.  In “From Sing Sing to Broadway,” the stark reality of prison life was portrayed. In fact, the stage show featured voices of prisoners from Sing Sing, Woodbourne and Fishkill prisons. Sean knows what it is like to go through the process himself.  During his 15 year incarceration, he received considerable training in non-violent conflict resolution. Through this time he received support from the Youth Awareness Program.   As a founding member of RTA, he appeared in 11 productions in total.  He received acting credits for: One Flew Over the Cuckoo’s Nest, Slam, and Twelve Angry Men.   He also appeared in Susan Strohman’s production of Mel Brooks’ The Producers. 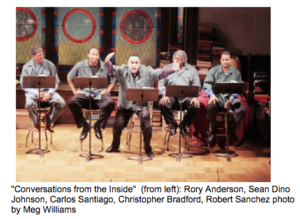 Sean trains professionals in rehabilitating gang members.  He does this through topics including: Gang Prevention, Gang Intervention and Violence Prevention.  As well as one to one and group training, Sean is a powerful and dynamic public speaker.  He takes command of his audience,  you can usually “hear a pin drop” during one of his presentations.  Sean has presented to students, mental health workers and those in law enforcement.

Interested in Sean speaking in front of your audience?  He is available for Gang Summits, Gang Conferences and continuing education opportunities.

Sean is available to present individually or with Lisa Taylor-Austin.

Availability: Nationally and Internationally
Length: 2 hours
Goals: Attendees will understand the positive impact of rehabilitation through the arts.

Listen to an interview with Sean “Dino” Johnson

Sean “Dino” Johnson is an independent contractor with The Taylor-Austin Group, LLC

Contact us for more information about our services and experts.